Tarascosaurus was a large predatory dinosaur from Cretaceous Europe. It lived about 80 million years ago and was

one of the dominant predators in its environment.  Tarascosaurus was also a possible inhabitant of Romania.  It was an abelisaur, a group closely related to the earlier ceratosaurs, and is one of the only abelisaurs found in the Northern Hemisphere.

Like all Abelisaurs, Tarascosaurus had a somewhat short skull. It's jaws were very powerful and housed dozens of sharp teeth over 3 inches long. Tarascosaurus also had very short amrs. In fact, Abelisaurs in general had some of the shortest arms compared to body size of any dinosaur. They also had 4 fingers.

Tarascosaurus, like many abelisaurs, had long, powerful legs. It is thought that Tarascosaurus may have been able to run at a top speed of over 20 miles per hour.

Tarascosaurus was one of the apex predators of its environment. It would have had a large variety of prey to hunt, including sauropods and iguanodonts. With the dromaeosaur Pyroraptor being its only significant competition, Tarascosaurus most likely did not have to struggle to find prey.

While Tarascosaurus is not a very well known theropod, it still made one major appearance in the media. The documentary Dinosaur Planet

featured Tarascosaurus as the foremost predator of Southern Europe. In the same documentary there are even two dwarf Tarascosaurus. 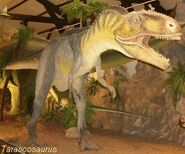 Retrieved from "https://theropods.fandom.com/wiki/Tarascosaurus?oldid=4809"
Community content is available under CC-BY-SA unless otherwise noted.